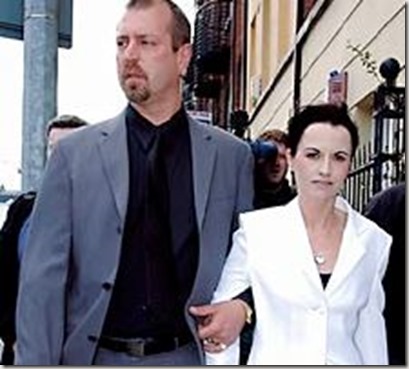 Renowned for her defiant touch and yodeling, Dolores O’Riordan was the soul of ‘Cranberries.’ Her distinctive voice mixed with Irish brogue made her an icon of the industry. But her sudden death on January 15, 2018 sent shockwaves into music fraternity. Speculations were made and rumors around her death circulated in various gossip columns. This only fueled interest on her personal life especially her ex-husband.

O’Riordan was married to Canadian music executive, ‘Don Burton’. She was just 23 at the time and have three kids with Burton. Apart from being the husband of Dolores, Don has worked as the tour manager for the British band “Duran Duran”. Later after marrying Dolores, he joined “The Cranberries” as the manager. But there is more to his story than just this. Here we breakdown the life timeline of Dolores O’Riordan’s ex-husband, ‘Don Burton.’

The Canadian native was born on January 27, 1962.  Born and raised in Canada, he grew up with the dream of making a career in the music industry. For a boy who didn’t have any godfather in the music industry, it seemed quite difficult to live up his dreams. When other children of his age were getting addicted to drugs, he got addicted to music. Through out his teens, he used to play for a band whose name is relatively unknown.

Don’s father owned a trucking business. This is where he learned the management skills. He worked as an administration officer at his father’s office before launching his career in the music industry. Meanwhile, many part of his early life is something that’s still a mystery. He is better popular for being the husband of the late Irish singer Dolores O’Riordan.

Burton started his professional career working as an administrative officer at his father’s business. As Burton was interested in music since his childhood, he continuously searched for the opportunities to establish himself in the music industry. Luckily, his hunt finally ended when he was offered to work as the tour manager of the British new wave band “Duran Duran”. Don worked at his best as the manager of the band. He is thankful for the band for giving him a huge success as well as for his girl Dolores.

He met his beau Dolores when the “Duran Duran” and “The Cranberries” were touring together. As a result, he brought “The Cranberries” over to his company Left Bank Productions and became the band’s manager in 1994.

The Irish singer Dolores and Burton crossed each other’s path for the first time when their respective bands were touring together in the 90s. She was an up and coming star working her way to the top. And, he was a manager for Duran Duran. It didn’t take too long for them to fall in love with each other. The late singer described their first encounter with the Irish Independent as:

I had a skinhead and Doc Martens and I didn’t think he’d go for my kind of thing.  Thought he’d go for mainstream and blonde. I think he liked me because I was weird and different.”

They had a brief romance and quickly fell for each other. Dolores even showered her love by making a tattoo of his name on her right shoulder. They dated for six months before walking down the aisle. The couple tied the knot on July 1994 at the Holy Cross Abbey in Tipperary, Ireland. They were the coolest couple of the century and their wedding was evidence to it.

Don Burton and Dolores O’Riordan Wedding was a Grand Celebration

The pictures of their grand wedding circulated all around the web as it was among the most lavishing one. The lead singer of “The Cranberries” arrived at the church in a pony and trap wearing cream knee-high boots, lace tights, and a transparent dress. The animal lover Burton arrived on a horseback wearing leather and snakeskin with a ponytail. After exchanging the vows at the Holy Cross, they rode on the horse to their wedding celebration venue Aherlow House Hotel. Many celebrities gathered at the venue to celebrate their big day. The iconic singer’s mother Eileen revealed that it was O’Riordan’s childhood dream to get married at the Abbey.

The couple spent their time traveling between Burton’s hometown Canada and Dublin after their marriage. In 1996, the couple permanently moved to Canada. The pair together are parents to three children namely Taylor Baxter (born on November 23, 1997), Molly Leigh (January 27, 2001), and Dakota Rain (April 10, 2005). Dolores in an interview revealed:

“I’m in a place of great happiness. I’ve never been happier or as calm or contended in my life. I have the greatest husband in the world in Don and we have amazing kids. He showed me that life is not about success but having fun.”

Dolores after getting married gave much of her time to her family. For her, her children and family were on top before anything. She enjoyed being a mom than a celebrity. In an interview with The Independent in 2009, O’Riordan stated:

“I enjoyed living in Canada, where my husband comes from because I was treated like any ordinary person. I became a volunteer at my children’s school, I went into the classroom. It was very grounding. I got sick of being famous.”

Their love story was at peak until 2014 when the romantic couple decided to part their ways.

On November, 2014, Dolores was arrested for airport rage incident. Her mother Eileen was quick to defend her daughter stating that she was separating from her husband and was in a vulnerable state of mind. Burton and Riordan ended their 20 years long relationship in late 2014. The details about their divorce is still unknown.

Soon after separation, the singer moved to her native land Ireland while Burton moved to Toronto. They say “Life goes on no matter what.” Dolores moved on in her life and found a new partner in Ole Koretsky as per some sources.

Don Burton was previously engaged in a relationship before marrying Dolores. From his past relationship, he has a son named Donny Burton.

Their Kids Lived with Don After their Divorce

In 2018, it was reported by Mirror that their kids Taylor Baxter Burton (23), Molly Leigh Burton (20), and Dakota Rain Burton (16) were living in Toronto with their father Don Burton. In a previous interview, Eileen O’Riordan, Dolores mother also admitted that her grandkids were with their father due to Dolores’s on going struggle with mental health.

“They just know that mommy isn’t well at the moment,” she told the Mirror.

She also revealed that her daughter’s divorce had a huge toll over her mental condition. In 2015, Dolores was diagnosed with bipolar disorder. Eileen also revealed that Dolores had been keeping touch with her kids over the phone. She also was very vocal about her love for her kids.

“The best time in my life was the years spent at home with my family. I love being a mum. My kids don’t see me as a famous person, or have any kind of expectation; I’m just their mum.”, said Dolores in an interview.

When she thought she was down and out, she said her kids gave the motivation and inspiration she needed for that extra push. Her numerous tracks was written for her kids she revealed. Tracks like ‘Chocolate Brown’ was dedicated to her little boy because she felt guilt for not being able to play with her son. Her song ‘Animal Instinct’ was written when she was pregnant for the first time.

It would have been really hard on her to stay away from her kids. But this is probably what the ex-couple thought would be best for their kids.

Dealing with Sudden Death of his Wife

The iconic singer Dolores O’ Riordan unexpectedly passed away on January 15, 2018. She was found dead by the hotel cleaners in the Hilton Hotel, London. She had traveled to London for a short recording session. The news of her death created a wave of sadness among her family, children and thousands of her fans. The news was broke to the public by O’Riordan’s publicist. It stated:

“The lead singer with the Irish band ‘The Cranberries’ was in London for a short recording session. No further details are available at this time. Family members are devastated to hear the breaking news and have requested privacy at this very difficult news.”

Some rumors suggested that she might have committed suicide because of her failed marriage relationship as she was suffering from mental illness. The actual reason behind her death wasn’t known. Burton and family arrived at the Church of Saint Ailbe, Ballybricken, Co Limerick to bid final goodbye to the singer.

To deal with the death of someone close to your heart needs great courage and time. Her children are finding it quite difficult to deal with the tragic incident. As per Irish news, her three children are moving houses in Canada to escape from the memories.  The late singer’s mother Eileen revealed that her two daughters are doing okay but her son Taylor isn’t. She stated:

“The girls are doing okay but Taylor is understandably finding it very hard. They are moving houses- too many memories.”

She also revealed that prior to the tragic incident, Dolores was recording a song with her son Taylor. Her statement goes like this:

“Dolores was recording with Taylor two weeks before she died. He has a great voice. They had the studio and the whole lot ready but poor Taylor has got a very bad sore throat problem. He couldn’t do it. It is a pity. I suppose it wasn’t meant to be.”

Her fans are still sending flowers and letters to the family. Her family and fans from different parts the world is still mourning her death.

When you belong to the ‘CELEBRITY’ category, then no matter how hard you try, you can’t escape from the controversies. The former couple were involved in a controversy back in 2004. They were taken to the court by their former nanny, Joy Fahy on allegations like heavy drinking and mishandling of their child. The couple denied the claims.

“You don’t drive with a drink in one hand,” he said. It was physically impossible to drive a jetski holding a child and a beer,” he said defending his case.

She lost the case against the former couple for false imprisonment and breach of contract.

Likewise, just prior her divorce with Don, the late singer was arrested by the police. In November 2014, a case was filed against Dolores for assaulting a police officer and an Aer Lingus air hostess at Shannon airport. She warned the arresting officer at the airport. She told:

“You can’t arrest me. I’m an icon. I’m the queen of Limerick. You don’t know who you are dealing with. I pay my taxes so I pay your wages and I am going to sue.”

Don Burton must have collected a good fortune from his career as a tour marriage. The ex-couple owned several properties including Riversfield Stud Farm in Kilmallock when they were together. They even bought properties in Dublin and Canada. The couple before moving to Canada, the family were living at their 150-acre stud farm. They sold the farm six years after buying it sealing the deal in 2004. Later on, Dolores and Don moved to Canada along with family. Dolores revealed:

“Don, who’s a Canadian, loved horses. So being around the animals and enjoying the farm was an amazing experience. Then we decided to move to Canada to be nearer family. It’s a beautiful country with a lot to offer. We lived in a log cabin, surrounded by bears, wolves, and all the great outdoor stuff.”

From the properties he has, we can say that he has a massive amount of money to support his lavishing lifestyle. However, his exact net worth is not known yet. Meanwhile, his ex-wife and late Irish singer had an estimated net worth of $25 million at the time of her death.